Music television has lost all credibility selling our need for musical entertainment and education out to the demands of mass media. So instead of numbing your brain with shockingly petty tv shows scripted at the intellectual level of an averagely educated banana and getting your nerves wrecked by mercilessly repetitive advertisements for the most unnecessary things on earth, FOLLOW MY BLOG and indulge yourself with my WEEKLY MUSIC RECOMMENDATIONS. STAY AWESOME.

My absolute favorite of this week comes from Sam Smith who recently caught everyone’s attention with his smash hit “money on my mind”. “Stay with me” is the second single from his upcoming record and i’m a hundred percent sure it will go viral within no time. Although it’s a rather slow song it has an incredibly strong vibe. From the first line on you will find yourself stunned by Sam Smith’s insanely soulful and emotional voice which will literally make you feel the heartbreak of the stories of a seemingly very sensitive young man who with no doubt will become a huge star on the sky of today’s soul and also pop music.

Spring has finally arrived in Vienna and all the outdoor clubs and bars are opening again. With their song “Take Me” the Australian Indie/Electronic combo RÜFÜS provides us with the perfect soundtrack for friday nights out, having some drinks and dancing the night away under the open sky. The song is best described as a mixture of relaxed vocals underlaid by loungy beats and spiced up with nineties inspired synth elements adding up to the perfect cocktail to trick your mind into imagining yourself partying out on the beautiful beaches of Australia.

I think i don’t need to introduce you to the greatness of Paolo Nutini as probably everyone of you who’s interested in music will have heard of him already. However “Iron Sky” is my favorite song from Nutini’s new record “Caustic Love”. It comes along as a classical soul song with a strong political message. I don’t know if it’s the lyrics sang by Paolo Nutini’s unique voice or the general mood of the song but “Iron Sky” always creates this rebellious feeling in me. It gets you to think about society and makes you want to “rise over love and over hate, through this iron sky that’s fast becoming our mind, over fear and into freedom.” Apparently nowadays’ music industry has not yet managed to kill and eradicate all true, artistic and sophisticated aspirations in successful musicians. 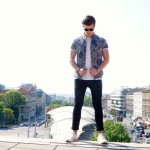 Art of Awesome – Bandana Over the Roofs

Beard as an Accessory – Stylish Beards...

Thank you for the wonderful sound but also thank you for your sensitive, powerful and inspiring comments.
Love you my son

thanks ula! i’m gonna check them out right away! U definitely gotta come visit us here in austria soon. best time of the year here in vienna 🙂