Here are my three top picks of this week.

1. DISCLOSURE – WHEN A FIRE STARTS TO BURN

Looking for an energetic, motivational feel well song? This might be the one! A rather simplistic yet intense beat meets a catchy punchline. Roaring out of the beautiful north of Europe, Disclosure is  yet another one of Sweden’s great pop music exports. Their style might be described as a mix of slightly poppy and catchy melodies with more futuristic electronic elements, always underlined by very strong beats.

This song has already been in my playlist for over half a year and i could still listen to it on constant repeat. The reason is not its promising title but rather that I haven’t heard many pop/rock bands recently that write as catchy songs as the 1975 without sounding cheesy or boring after a while. The energy of this song will catch you from the start. Addiction guaranteed.

I stumbled across this song last week when i watched the movie “a long way down” and got caught by its breathtaking melancholy. The mood it creates is intense but still great and you can watch yourself drift away in your thoughts on the waves of insanely strong instrumental parts alternating with a voice that will put an arrow straight through your heart showing you that no matter what, there are still some emotions in there. 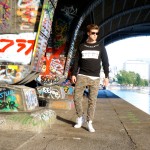 The Explorer | Discovering Semmering with Vangardist...

Thank you for sharing this great music.
Mom